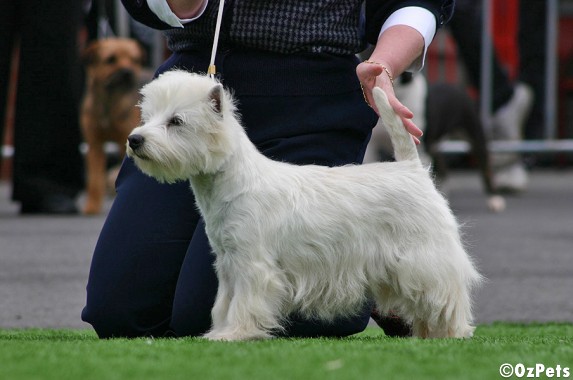 The Westie, is a breed of dog from Scotland with a distinctive white harsh coat with a somewhat soft white undercoat. It is a medium-sized terrier, although with longer legs than other Scottish breeds of terrier. It has a white double coat of fur which fills out the dog's face, giving it a rounded appearance.

The breed is intelligent, quick to learn, and can be good with children, but does not always tolerate rough handling. The Westie is an active breed, and is social with a high prey drive, as they were once used to hunt rodents. 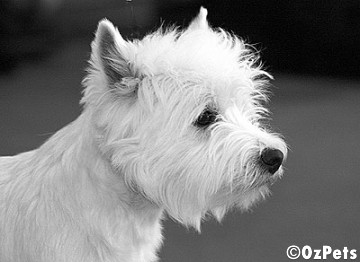 The modern breed is descended from a number of breeding programmes of white terriers in Scotland before the 20th century. Cousin to the Cairn Terrier, the Westie was bred to hunt small rodents at places such as farms. Edward Donald Malcolm, 16th Laird of Poltalloch, is credited with the creation of the modern breed from his Poltalloch Terrier, but did not want to be known as such.

The breed remains very popular in the UK, with multiple wins at Cruft's. It has been in the top third of all breeds in the US since the 1960s. It has been featured in television and film, including in Hamish Macbeth, and in advertising by companies such as Cesar dog food and the Scotch whisky Black & White. 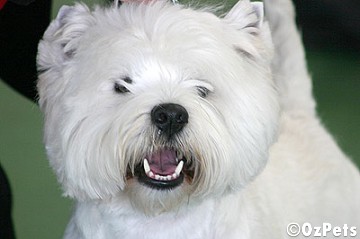 The temperament of the West Highland White Terrier can vary greatly, with some being friendly towards children, while others prefer solitude. It will not typically tolerate rough handling, such as a child pulling on its ears or fur, and can frequently be both food and toy-possessive. This makes regular training from a young age of particular importance. It is normally independent, assured, and self-confident, and can make a good watchdog. It is a loyal breed that bonds with its owner but is often on the move, requiring daily exercise. The Westie is highly social and is the most friendly and jolly of all the Scottish breeds of terriers.